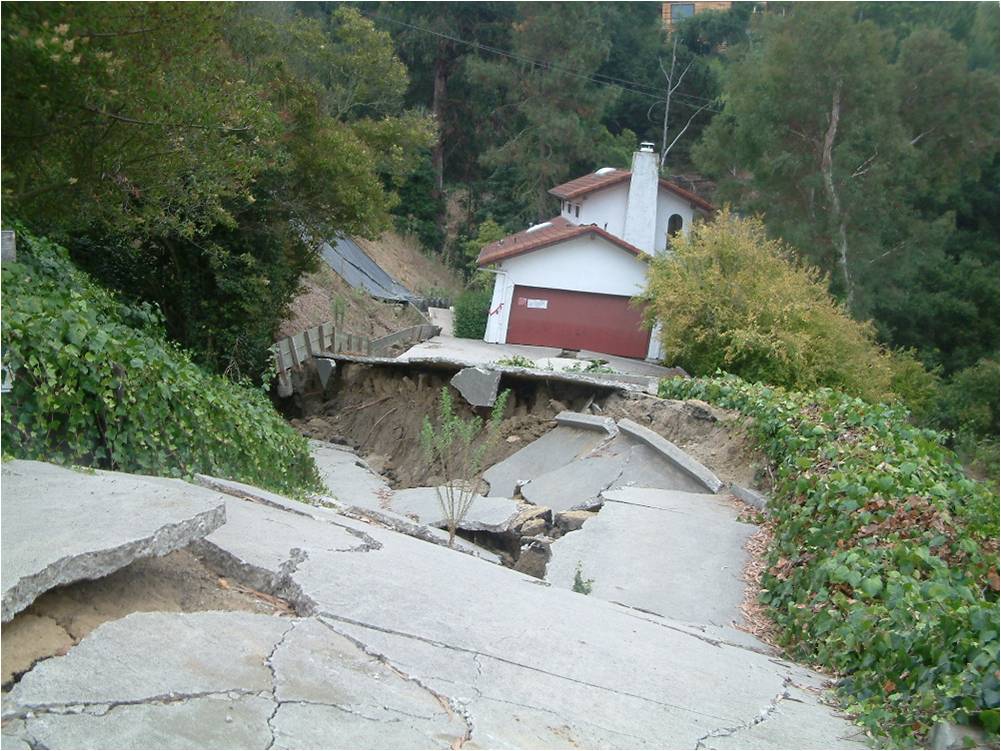 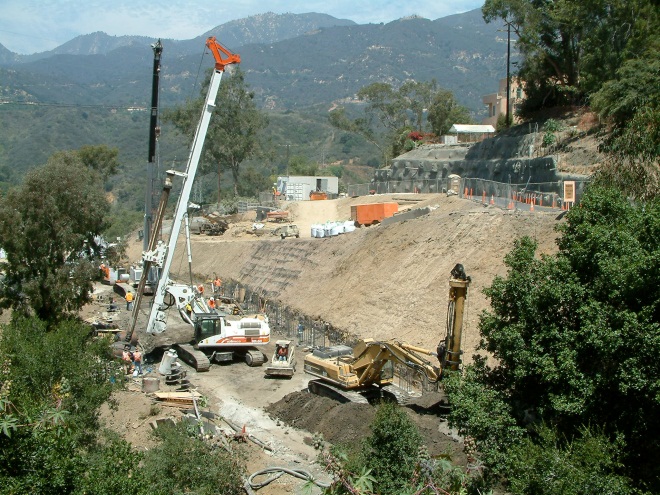 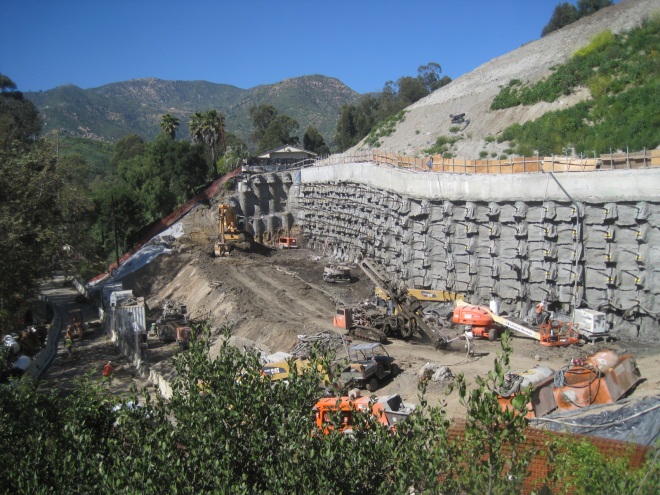 This project involved a large (500 feet in width by 800 feet in length) landslide that occurred in a residential neighborhood destroying some homes and threatening others.   The landslide initiated as a rock topple failure in 2001, then mobilized into a million cubic yard translational landslide in 2005.

CSA investigated the landslide with 52 small diameter borings, 15 large diameter exploratory shafts, and extensive laboratory testing.  Geophysical methods (refraction and ReMi) were performed and representative earthquake ground motion records were compiled to estimate the level of ground shaking that could occur on site.

Computer programs (SHAKE and DMOD) were then used to evaluate the seismic performance of the slope. The seismic and static stability of the slope were evaluated. CSA then prepared engineered plans for a seven stage repair. The repair included multiple tieback shotcrete walls, with multiple rows of tieback reinforced shear pins, reinforced concrete shear cleats, a reinforced earth buttress and horizontal drains. 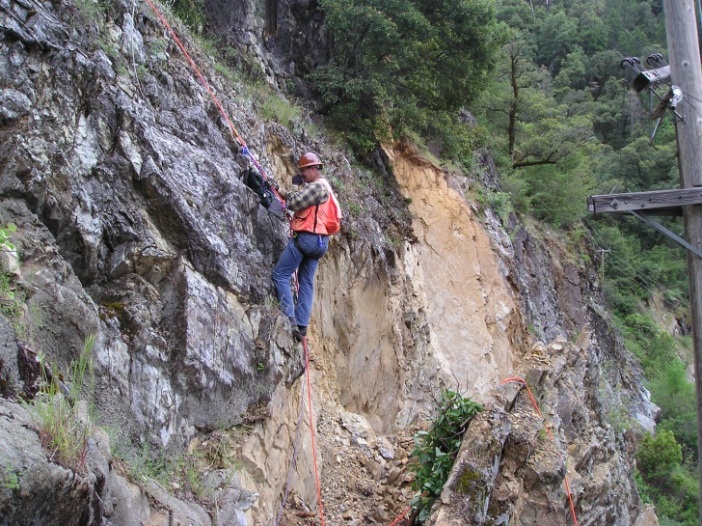 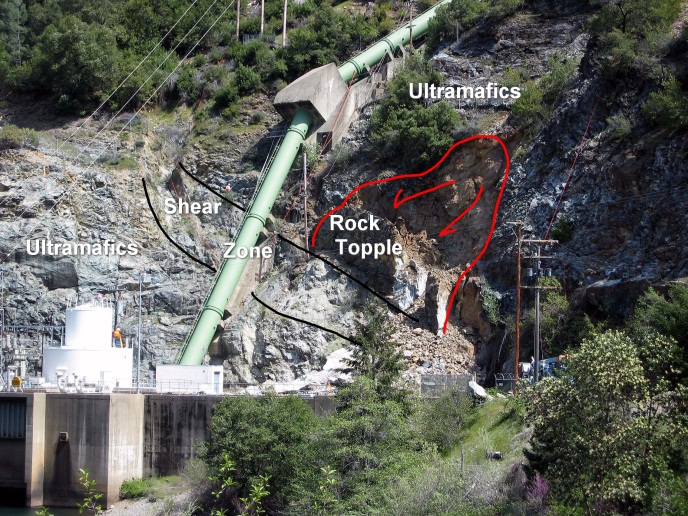 The failure mechanism appears to be a secondary toppling process where the shear zone rock deforms, removing support to the overlying rock mass.  Joints within the rock mass begin to open and toppling commences.  This type of failure mechanism may occur elsewhere and hence the stability analyses techniques are of interest.  Three different types of stability analyses were performed to analyze the rock bolts; a toppling limit equilibrium analysis (LEA), a Discontinuous Deformation Analysis (DDA) and a finite element analysis (FEA).  Each method had advantages and limitations with respect to this particular failure mode.

The final repair sequence began with the removal of the toppled rock and debris, slope scaling, and the installation of 38 horizontal drains to relieve water pressure.  The shear zone was then supported and protected from future weathering and deformation by installing 103 soil nails and a reinforced shotcrete cover. 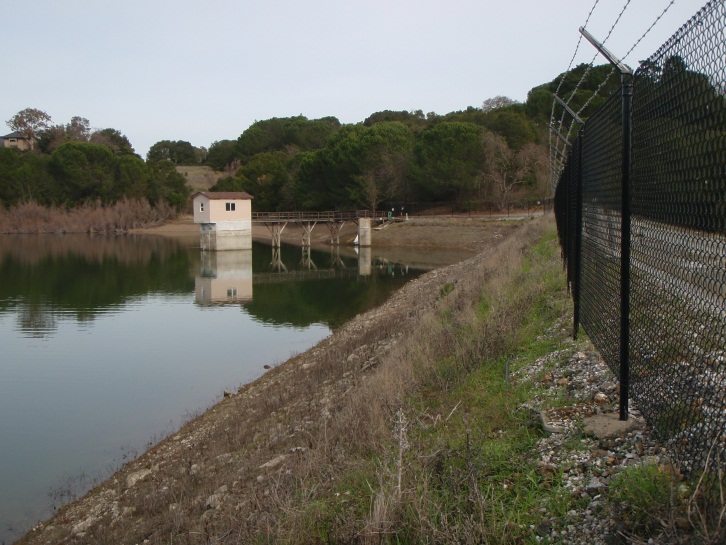 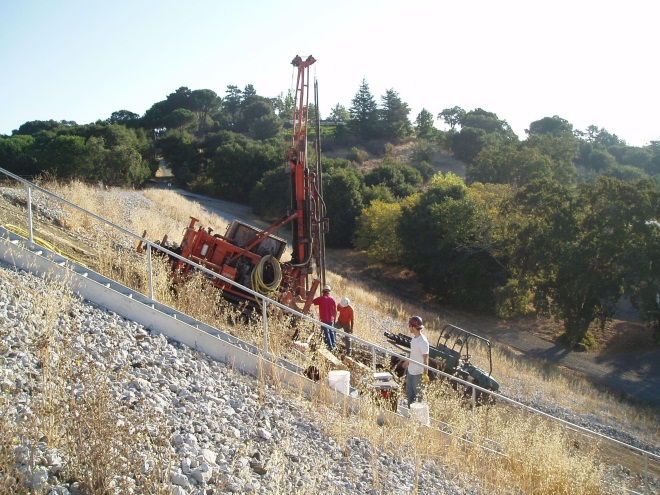 CSA was contracted by California Water Service Company (CWSC) to investigate possibly increasing the drawdown rate at their Bear Gulch Reservoir in Woodside, California.    We consulted with the California Division Safety of Dams (DSOD), and learned that the dam lacked sufficient monitoring instrumentation and a recent slope stability analysis.  We assisted CWSC in preparing the application to investigate subsurface materials, installed 3 slope inclinometers, and 11 survey monuments.

Our investigation consisted of drilling, logging, and sampling 4 borings, and laboratory testing.  We then performed slope stability analysis which confirmed that the dam was stable, and the rock buttress could be lowered at a faster rate.  Recently, CSA further investigated the subsurface conditions of the dam, and installed 3 piezometers.  Results indicated that the dam might not be stable during seismically induced ground shaking. Presently, CSA contracted a third-party review to review our analysis, evaluate the conclusions and provide recommendations regarding stabilization measures for the dam. 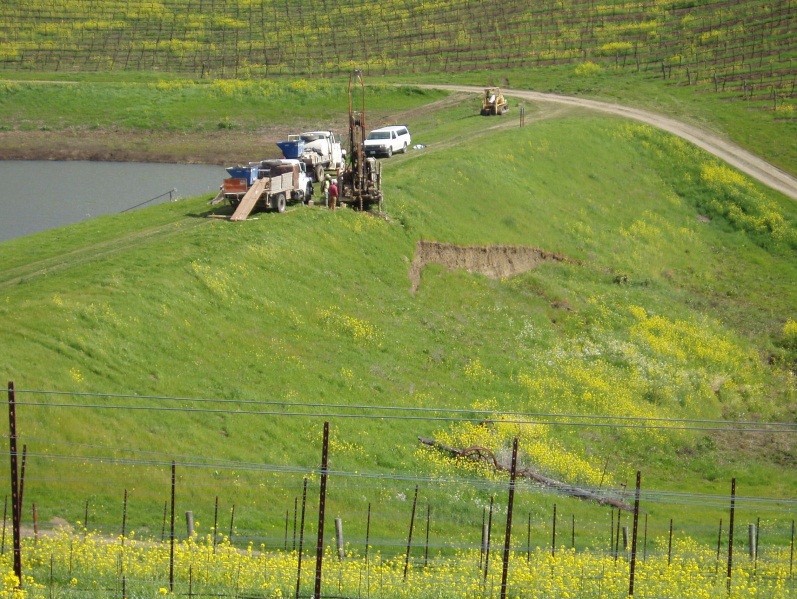 This was an emergency project involving the formation of a landslide on the downstream face of an earth dam at Artesa Winery in Napa Valley.  Cotton, Shires and Associate’s initial response included engineering geologic mapping and assessment of the situation.  Later CSA performed a field investigation that included subsurface drilling and a seismic refraction survey.  Samples of earth materials were also obtained for testing.  In addition an inclinometer and piezometers were installed for future monitoring.  Recommendations and cost estimates were then made for mitigation measures. 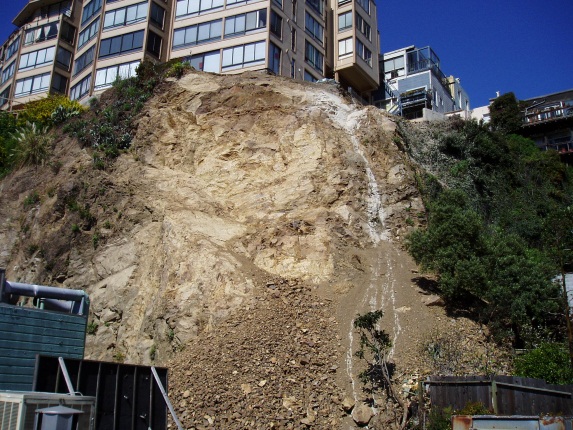 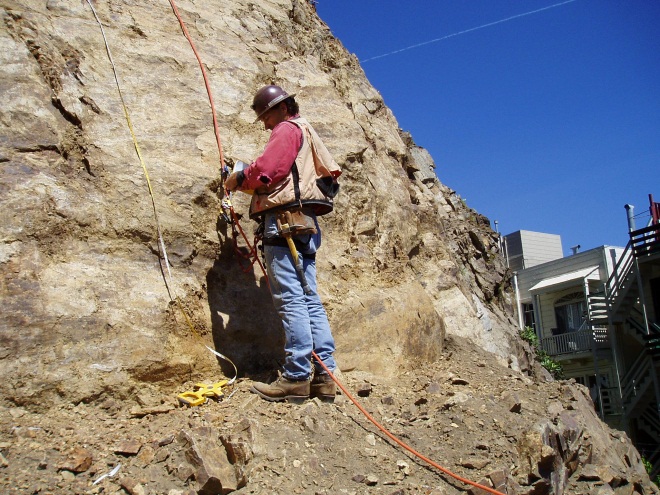 During heavy rainstorms in February of 2007, a steep hillside in a densely populated residential area of San Francisco failed as a large, catastrophic rockslide.  The rockslide debris impacted buildings below the rock face and threatened public safety. The failure also resulted in the forced evacuation of the upslope condominium. CSA was retained to provide emergency geotechnical investigation and repair services to reduce the hazard from falling rock.

The investigation included a review of historical aerial photographs, detailed topographic surveying, engineering geologic mapping using ropes and climbing gear, excavation and logging of a vertical exploratory shaft, and slope stability analyses for repair design. After the safety of the slope had been improved, rock bolts were drilled to support other rock blocks that could potentially fail.  Wire mesh slope protection was attached and draped over the slope to catch and control the movement of smaller pieces of rock. 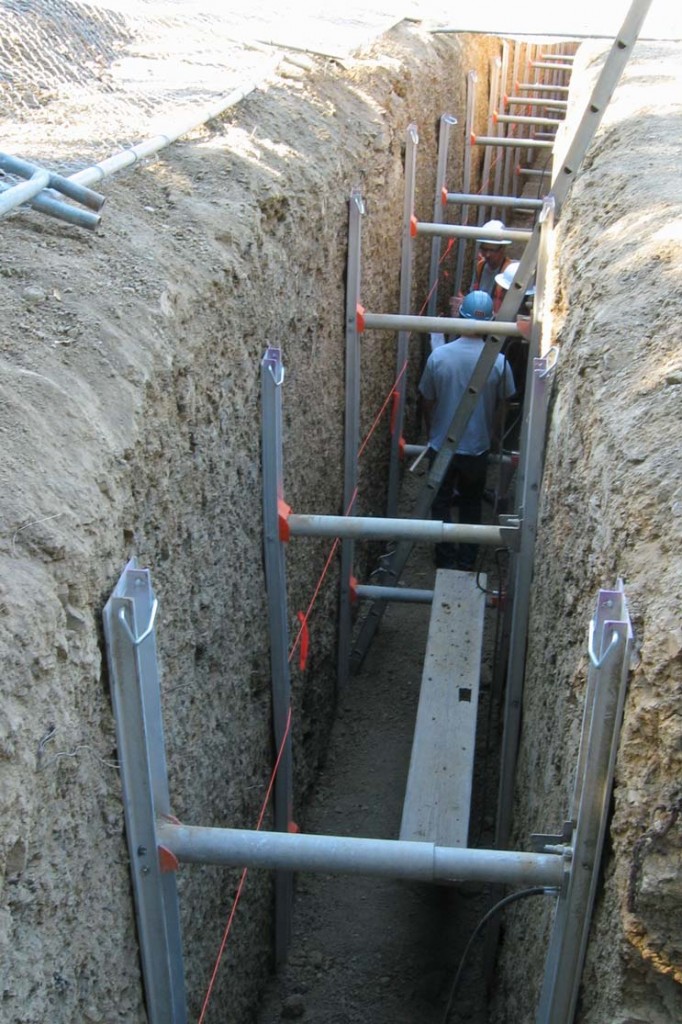 At a site in the Santa Cruz Mountains near the City of Saratoga, CSA performed a fault investigation for a proposed facility located within the Alquist-Priolo Earthquake Fault Study Zone surrounding the San Andreas fault.  The proposed facility included several structures that would be occupied by workers, so a fault investigation was required in order to evaluate the potential fault rupture hazard and to satisfy building permit requirements.

CSA’s investigation included review of historical aerial photographs and LIDAR imagery to identify possible fault-related surface geomorphic features.  This was followed by subsurface investigation using over 800 lineal feet of exploratory trenches (an example of a trench log is shown to the left).  Where structures were proposed within close proximity to the main trace of the San Andreas fault, we identified adjacent areas that were free of faulting and made recommendations for setback from identified fault traces.